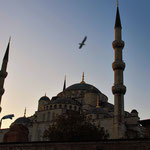 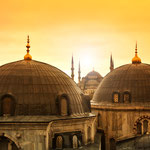 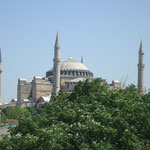 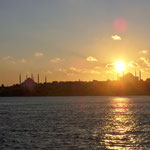 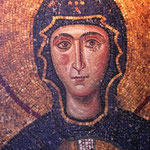 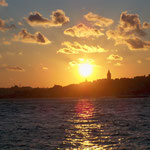 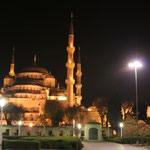 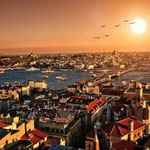 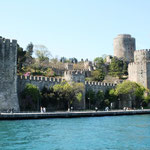 Tour of "Sultan Ahmet Center", the heart of the "Old City" from where the Byzantine and Ottoman Empires were ruled.

Hagia (St.) Sophia, one of the greatest marvels of architecture, constructed as a basilica in the 6th century by Emperor Justinian.Built in 537 by Byzantine Emperor Justinianus, St.Sophia has been the largest cathedral in the world for nearly a thousand yeras; it is considered the masterpiece of Byzantine architecture;after having been the Patriarchal basilica of Constantinople, it was converted into a mosque in 1453 by Sultan Mehmet II. the Conqueror and in to a museum by Atataurk in 1935.

Blue Mosque, facing Hagia Sophia, famous with its blue Iznik tiles and unique with 6 minarets, built in the name of Sultan Ahmet.The last great imperial mosque of the classical period; it is name comes from 20.000 marvellous blue-toned Iznik tiles decorating the interior walls.

Lunch at the Special Turkish Restaurant

Topkapi Palace, this extraordinary and secret palace was the residence of the Imperial Ottoman Sultans and the center of the Ottoman might for nearly 400 years.The building are a typical example of Ottoman architecture and the rooms exhibit rich collections of porcelains, robes, weapons,shields,armors,Ottoman miniatures, Islamic calligraphic manuscripts as well as Ottoman treasures and jewellery.

*Prices are per vehicle